This move is taking all of our time lately so we have not been working out other than the hockey I have been playing. We will get back at it as soon as things settle down but meanwhile we will try to get some workouts in when we can. I will likely not be blogging much until things settle down though.
Posted by Scott at 8:07 PM 2 comments:

We were supposed to do Legs and Back last night but my legs were, and still are, feeling pretty tore up after doing Plyo for the first time in over a month so we switched it up a bit. We did Back and Biceps last night along with the Ab Ripper X we did not do the other night after Plyo and we will do the Legs and Back workout Saturday. Last night was a good workout as far as Back and Bicep and we both bumped up weights and or reps on most exercises. Ab Ripper X was another story. I think I have mentioned before, and Tony talks about it a bit during the DVD, that this workout works your upper legs a good bit as well. It is really more of a core workout than just abs but that can be a problem if your legs are feeling like ours were. We pushed through and did pretty well, better than when we first started this but not as good as we were at the peak for sure. By the time it was over we were both sort of laying on the floor like a pile of jello or something, kind of like this. 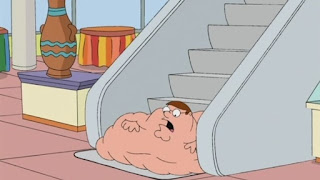 We will be taking the day off today to go and do a little house hunting, should be fun.
Posted by Scott at 10:19 AM No comments:

Note to self: Do not eat Italian Sausage prior to doing your Plyometrics workout. I still love this workout but man did it kick my ass last night. It was apparent that we had not done this one in over a month by how dog tired we were by the end, as Tony says I was rickety. I could barely keep my legs under me by the time we got to the gap jumps and after the workout they just did not want my weight on top of them at all. We made it through though and it felt good. A little sore in the triceps and shoulders today from Tuesdays workout but it feels good. My legs are a little sore from Plyo yesterday so it should be interesting doing the Legs and Back workout today. Looking forward to it though.
Posted by Scott at 12:00 PM No comments:

In spite of the fact that I purchased and love the P90X program I am not generally interested in what I see on TV infomercials. My son, who is 4, loves all of them and thinks we need everything he sees on TV but that is besides the point. Given this I was surprised at how interested I was in a recent infomercial I saw. We had just finished a workout and I switched back to broadcast TV from the DVD and there was a commercial for the Dosho Gym 5000. As intrigued as I was I am still pretty skeptical. This device was apparently designed by the same guy who came up with the original bowflex stuff. I own the selectech 552 dumbbells from bowflex and I like them a lot so I thought maybe this is the real deal. After doing a little digging around on the web I have not been able to find many reviews of the Dosho Gym other than complaints from some bodybuilders who have actually never used the system so I am not putting much weight (no pun intended) behind what they say. Besides these are some of the same people claiming the selectech dumbbells are junk and I could not disagree more with that, you can't just drop them on the floor like iron dumbbells but they are pretty sturdy and a real space saver.
What I have found out about the Dosho is the dumbbells only adjust up to 45 pounds each in 5 pound increments but there is an add on you can buy that will increase that to 70 pounds, I would like to see more like 100 pounds but 70 is certainly better than 45 which is no where near enough. I am not sure how useful the "lift assist" part would be for me but the bench appears to be constructed pretty well and would give me a range of exercise capabilities that I don't currently have at home and variety is a good thing. I like the fact that the dumbbells are a sturdy metal construction. This is one of the complaints people have about the selectech dumbbells, they are a plastic and the adjustment mechanism can break if you drop them. I have not had problems with this but I am careful not to drop them. The Dosho dumbbells appear to be a design that would not suffer from this problem. The price is also attractive given that I was thinking about buying the next level selectech 1090 and the cost of the Dosho is $100 less, I would need to spend an extra $79 on the extra weight for the dumbbells but still cheaper. It appears the only way to get this equipment is by ordering through the web sit and this is a drawback. I would like to be able to go into a retailer and try the equipment first before shelling out that kind of money.
Bottom line for me is this looks like a promising idea but I think I will wait for some reviews and/or the ability to try the equipment in person before I buy. If anyone has any more direct experience with this I would love to hear about it.
Posted by Scott at 9:44 AM 2 comments:

I played hockey Sunday night but Monday we did not work out due to some more house hunting activities. We did Chest, Shoulders, & Triceps last night instead and it went well. We are going to have a tough time keeping up with the 6 day a week schedule with the house thing going on. The plan is to make sure we get the 3 weight workouts in every week along with at least one cardio workout which we may vary from week to week. I am thinking tonight we might do Plyo. I love that workout and we have not done it in a long time. Once we find a house and get settled again we can do another 6 day a week round.
Posted by Scott at 9:18 AM No comments:

Skipped Yoga last night due to house hunting crap and puking kids. Will be playing hockey tonight though, should be fun. My biceps and back are crazy sore today. I can't really straighten my arms my biceps are so sore.
Posted by Scott at 7:32 AM 1 comment:

We had some house hunting stuff to do Thursday night so we skipped the X Stretch and Ab Ripper X. Friday was Back and Biceps and I am sore as hell today. We pushed pretty hard and even did Ab Ripper after the workout to make up for the skip the night before. Although it seemed we had lost a little ground at the beginning of the week we caught up as the week went on. Feels good to be back at it and it is nice to have reached my weight loss goal since I no longer feel guilty about missing a day. It is so much easier to maintain than to lose. If you are still in the loss part keep going because it is well worth the effort in the end. Looking forward to some Yoga tonight and another hockey game tomorrow.
Posted by Scott at 2:58 PM No comments:

Played hockey last night so the Leg workout today was a little brutal because my legs were a little sore. I also felt like I had not done a pull-up in like a month. All in all we did pretty good with this one. We seemed to not have lost much ground on this workout, not sure if it is just that we have been back at it for a couple days now or what but it felt good. Looking forward to some X Stretch tomorrow but not so much Ab Ripper.
Posted by Scott at 11:11 PM 2 comments:

I felt pretty ragged with the cardio work today. I was sweating so much it was unbelievable. The ab workout went pretty well though and I am sure by this time next week I will have gotten back into the shape I was in before the flu. Tomorrow I have a hockey game to play so we will not be working out, that is why we started Sunday instead of Monday. Looking forward to more weight lifting.
Posted by Scott at 10:42 PM 2 comments:

We started back in with round 2 last night at the beginning. In case you do not recall we are not doing the classic P90X schedule but are instead following the modified schedule given in one of the P90X newsletters here. It is pretty amazing what a couple weeks off can do as far as taking a step back, I am sure throwing in a bit of puking and starvation due to stomach flu does not help either. we both were back to about where we were the first week of round 2 before and Sarah had to take it a little easier on a few things due to still having a bit of soreness in the back but we did it and it felt good to get back at it. I also weighed myself this morning and came in at a whopping 147.8 pounds, again amazing what stomach flu does to you. On another note we just accepted an offer to sell our house and will be settling on April 6th. At that point we will be moving into my mother in laws house and we have no pull-up bars there so it should be interesting to see what we can figure out as far as continuing once we move in there, we will figure something out.
Posted by Scott at 11:09 AM 1 comment: